Together with Redex and Nabladot, we are promoting this initiative that has computationally recreated the behavior of mixed fluids of both gases in existing infrastructures, providing decisive knowledge to increase the presence of renewables in the energy mix.

The objective of the ComputaMeH project is to study the behavior of fluids composed of different mixtures of natural gas and hydrogen as they move through existing gas transport networks. With Redexis and Nabladot engineering as partners, this initiative coordinated by the Foundation for the Development of New Hydrogen Technologies in Aragon has been developed between September 2020 and March 2021 and has been funded by the Support Program for Innovative Business Groups (AEI) of the Ministry of Industry, Trade and Tourism.

The key to the project, whose full name is “Dynamic computational modeling of methane-hydrogen mixtures in natural gas transport networks”, is that it predicts, through computer analysis, how the fluid will behave in certain specific sections of the gas network. Up to six of them have been replicated with Computational Fluid Dynamics (CFD) models, which show what will happen with the velocity, pressures and other magnitudes of the gas at critical points such as reductions, bends, changes of direction or bypasses. This initiative has also served to model the quality of the mixing in the injection zone where the gas and hydrogen pipelines converge, the behavior of a compressor when driving mixed fluids of this type or the pressure losses that occur in long gas pipelines due to friction.

This methodology has made it possible to predict the physical aspects of hydrogen injection into the network in a much simpler and cheaper way than it would be possible to do it with real tests in the gas network or in scale systems, something that will be the subject of other projects in which Redexis or the Aragon Hydrogen Foundation will also participate. In this case, Redexis has provided the information related to gas infrastructures, Nabladot has carried out the computational work and, on our part in Fundación Hidrógeno Aragón we have worked on the interpretation of the results obtained.

The ComputaMeH project focuses on a key area with great potential for development, the injection of renewable hydrogen into the natural gas network. In addition to connecting production points with end users through a widely extended and proven infrastructure, it is a perfect way to take advantage of the possibilities that hydrogen offers in terms of linking the gas and electricity sectors by allowing the absorption of excess energy from renewable sources, transforming it into gas that can be used when and where it is needed. This demonstrates that the production of green hydrogen can make a decisive contribution to increasing the presence of renewables in the electricity mix, as well as to large-scale energy storage. 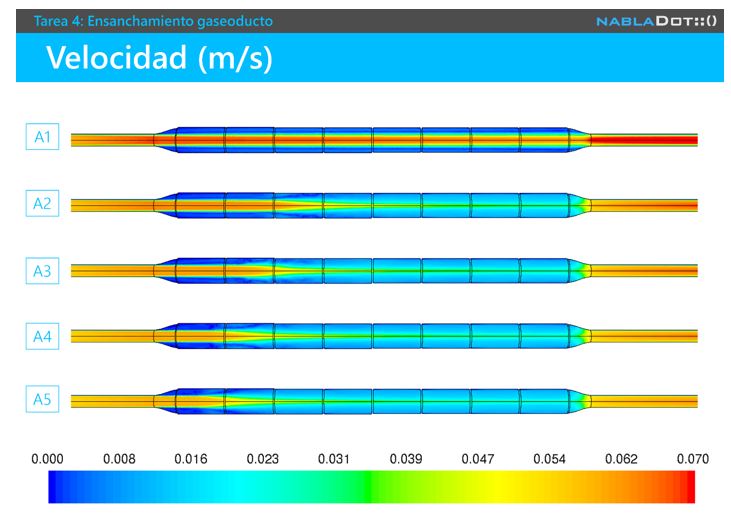 CFD simulation result (fluid velocity) of the flow of H2/GN mixtures at section changes in a gas pipeline.